Hug the curves or the sidelines. Need for Speed: Shift and Madden 2012 team up for the Limited Edition PSP Sports Entertainment Pack, complete with the most immersive handheld gaming experience, PSP 3000. The all-new driver profile system from Need for Speed identifies you by your driving skill and style. Or, take on all 32 NFL teams and all your favorite players, by building your own NFL dynasty in this latest installment of the Madden franchise – always True to the Game. Two classic titles. One amazing deal. Step your game up.

From gridiron to gridlock, Madden 2012 and Need for Speed: Shift team up with the PSP-3000 for the Limited Edition PSP Sports Entertainment Pack. It’s the most immersive handheld gaming experience together with the latest installments of two classic franchises. Two classic titles. One amazing deal. Step your game up. Toss in a 2 GB PRO Duo Memory Stick, as well as the media rich features of the PSP-3000, which include Wi-Fi access to the Internet and the PlayStation Store¹, music, movie and Skype functionality, a built-in microphone, a brighter screen and the ability to play games and movies in digital and UMD format and you have a handheld gaming bundle that you simply won’t want to put down. 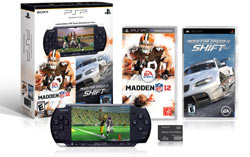 The latest PlayStation Portable revision, the PSP-3000 has everything older PSP models had, but now includes a built-in microphone, which lets you take advantage of voice features in some games, as well as the PSP’s built-in Skype functionality without having to use a headset. The new PSP-3000 also includes an improved anti-reflective screen that offers higher contrast and clearer visibility in well-lit places and can even be used outdoors.

Enjoy a back catalog of hundreds of games in UMD format.
View larger. 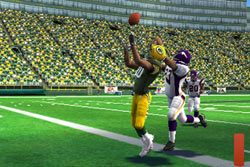 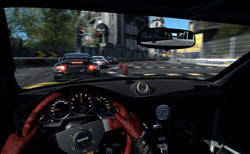 An authentic and immersive driving experience built by racers, for racers.
View larger. 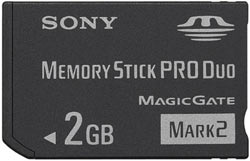 The PSP gaming library is hundreds of titles strong and covers a wide variety of genres. Whether you are seeking the hard hits of football, the strategy of a puzzle game, or anything in-between there’s sure to be many games for you – and your PSP-3000 can play them all, whether they are downloaded or in their original UMD format. Additionally, the PSP is capable of graphics quality that is comparable to the PlayStation 2, but in a pocket-sized package that you can take wherever you go.

With the PSP, you can show a slideshow of your photo collection with your friends by simply placing them on a Memory Stick Duo and accessing them via PSP’s XMB. Additionally, you can beam photos wirelessly to friends who also have a PSP via the devices ad hoc wireless connection.

Madden NFL 12 continues the rich tradition of the storied franchise by bringing fans closer to the NFL than ever before. Featuring all 32 teams, stadiums, and your favorite players in the league, Madden NFL 12 is true to the game and comes to life on the PSP-3000.

Designed to deliver a true driver’s experience that reflects contemporary motorsports, Need for Speed: Shift is built by racers for racers. Need for Speed: Shift delivers an authentic and immersive driving experience, replicating the true feeling of racing high-end performance cars like never before. Players are thrust into the heart of the action with immersive and exciting features including a stunningly realistic first-person cockpit view camera and an all-new crash mechanic, providing an unrivaled sensation of the speed and feeling of racing a car on the extreme edge of control.

The PSP-3000 is a portable multimedia powerhouse, capable of saving a wide range of files. With 2 GB of removable memory, the compact Memory Stick PRO Duo included in this bundle allows you to save your PlayStation Network downloads, as well as store your videos, photos, music and more.

Includes the PSP-3000, Madden 2012,Need for Speed: Shift and a 2GB Memory Stick Duo
PSP 3000 delivers a complete gaming experience unrivaled by other handheld systems. Sleek, Piano Black PSP-3000 features a brilliant, anti-reflective, 4.3-inch LED screen
Hundreds of movies, TV shows and games available to enjoy wherever you go
All-new driver profile system in Need for Speed: Shift, assigns unique player personas based on driving skill and style
From icing the kicker when the game is on the line, to building the next dynasty, Madden 2012 is true to the game featuring all 32 NFL teams, stadiums and your favorite players