The PSP-3000 has a 4.3″ LCD screen with the highest-contrast color ratio and best response time possible, plus anti-reflection technology so it can be played any conditions. It also has a built-in microphone and Wi-Fi access that lets users play and chat in multi-player games or call friends for free on Skype. You can load up memory sticks with new games (over 500 available), free demos, comics, movies and TV shows from PlayStation Store, listen to Internet radio, browse online, automatically download your favorite podcasts, and hook your PSP-3000 system up to your TV if you want to watch on the big screen. MLB 11 The Show: The #1 selling MLB franchise on PlayStation is back with MLB 11 The Show. Updated rosters, new stadiums, personalized batting stances and AI improvements bring even more realism. Perfect your skill, get to the Big Leagues and become an MLB Superstar in Road to the Show. Get ready to battle and ignite intense rivalries in Rivalry Mode. Welcome to the Show – Gran Turismo: Prepare for the most authentic handheld racing experience as the best-selling Gran Turismo series debuts on the PSP system. Prove your driving skills on 35 tracks, and trade or share more than 800 stunning cars from the world’s top manufacturers.

The PSP-3000 Limited Edition Father’s Day Bundle Entertainment Pack is the ultimate handheld bundle for the active gamer Dad, as it brings together the latest revision in the PlayStation Portable (PSP) hardware line, with a perfect blend of sports and racing titles. The bundle includes a “Piano Black” PSP-3000 system, a copy of PlayStation’s popular baseball game, MLB 11 The Show, and the Simulation racing extravaganza, Gran Turismo. Toss in a 2 GB PRO Duo Memory Stick, as well as the media rich features of the PSP-3000, which include Wi-Fi access to the Internet and the PlayStation Store¹, music, movie and Skype functionality, a built-in microphone, a brighter screen and the ability to play games and movies in digital and UMD format and you have a handheld gaming bundle that Dad will not want to put down. 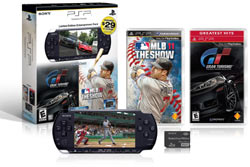 The bundle that lets Dad swing away and rev his engines this Father’s Day.
View larger.

The latest PlayStation Portable revision, the PSP-3000, has everything the older PSP’s had but now includes a built-in microphone, which lets you take advantage of voice features in some games as well as the PSP’s built-in Skype functionality without having to use a headset. The new PSP-3000 also includes an improved anti-reflective screen that offers higher contrast and clearer visibility in well-lit places and can even be used outdoors. 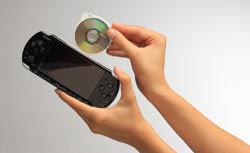 Enjoy a back catalog of hundreds of games in UMD format.
View larger.

Swing for the fences as you become an MLB superstar in MLB 11 The Show.
View larger.

The most realistic racing experience ever on a handheld in Gran Turismo.
View larger.

The PSP gaming library is hundreds of titles strong and covers a wide variety of genres. Whether you are seeking the hard hits of football, the strategy of a puzzle game, or anything in-between there’s sure to be many games for you. The PSP is capable of graphics quality that is comparable to the PlayStation 2, but in a pocket-sized package that you can take wherever you go.

With the PSP, you can show a slideshow of your photo collection with your friends by simply placing them on a Memory Stick Duo and accessing them via PSP’s XMB. Additionally, you can beam photos wirelessly to friends who also have a PSP via the devices ad hoc wireless connection.

The best in video game baseball is back on PSP. MLB 11: The Show is a multiplayer baseball game that delivers a true Major League Baseball experience on the PlayStation Portable (PSP) platform. MLB 11: The Show features the series’ acclaimed career mode in Road to the Show, as well as a the challenge of Rivalry Mode. Additional features include: new personalized batting stances, updated rosters and stadiums and two-player support via PSP wireless ad hoc connection.

The highly acclaimed Gran Turismo franchise makes its equally highly anticipated debut exclusively on the PlayStation Portable (PSP) system, introducing the most ultra-realistic racing experience ever on a handheld. Buckle up as you prove your driving skills on 35 tracks and trade and share over 800 stunning cars. With its unrivaled graphics, ad hoc multiplayer support for four racers and bonus feature for Gran Turismo 5 on the PS3, Gran Turismo continues to lead the pack, now on the PSP system.

The PSP-3000 is a portable multimedia powerhouse, capable of saving a wide range of files. With 2 GB of removable memory, the compact Memory Stick PRO Duo included in this bundle allows you to save your PlayStation Network downloads, as well as store your videos, photos, music and more.