The PSP-3000s built-in microphone provides additional voice functionality in certain games, as well allows for Skype functionality without the use of an additional microphone
Includes a copy of Madden NFL 11 for PSP along with the PSP-3000 for the same price as the hardware alone making for an outstanding value
Within Madden 11 enjoy game modes such as the classic Franchise mode, Superstar Challenge mode and Mini-Camp Competition mode, along with a mini-game and the ability to create your own custom plays

The PlayStation Portable 3000 Madden NFL 11 bundle brings together the latest revision in the PlayStation Portable (PSP) hardware line, with the ultimate gridiron thrills that gamers can only get with the Madden NFL game franchise. The bundle is a bargain, including both a “Piano Black” PSP-3000 system and a copy of Madden NFL 11 at a considerable savings over the purchase of both separately. Toss in the media rich features of the PSP-3000, including Wi-Fi access to the Internet and the PlayStation Store, music, movie and Skype functionality, a built-in microphone, a brighter screen and the ability to play games and movies in digital and UMD format and you have a handheld gaming bundle suited to any player.

Step your game up with the Madden NFL 11 PSP Bundle.
View larger.

Everything You See on Sunday

Madden NFL 11 reenergizes the game of football with a fun and exhilarating experience to ignite the passion of every NFL fan. Whether rekindling an old rivalry, putting your spin on the best moments of 2009, or building the ultimate dynasty in Franchise Mode, Madden NFL 11 will make you feel like every day is Sunday as you fight for fumbles, design your own plays, and feel what it’s like to be an NFL superstar in the ultimate NFL experience for PlayStation Portable. 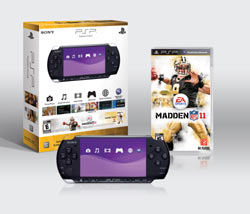 Take control in Madden like never before.
View larger. 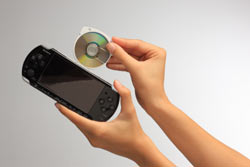 A feature-rich design that plays your entire UMD catalog of games.
View larger.

Build a roster from the ground up or play with your favorite team for three full decades in a quest to dominate for 30 full seasons in Franchise Mode.

Jets vs. Chargers in the AFC Divisional Playoffs. Colts vs. Saints in Super Bowl XLIV. Relive these classic moments and the best from the 2009 season while playing the role of hero or spoiler in Superstar Challenge Mode.

Become the architect of an unstoppable offense or ball-hawking defense by creating your own custom plays. Customize your team’s playbook to fit your playing style and live out your masterpieces as you take down your biggest rivals.

Gus Johnson, one of the most electrifying play-by-play commentators in sports, joins Cris Collinsworth in the booth, bringing a whole new level of excitement on every play.

The latest PlayStation Portable revision, the PSP-3000, has everything the older PSPs had but now includes a built-in microphone, which lets you take advantage of voice features in some games as well as the PSP’s built-in Skype functionality without having to use a headset. The new PSP-3000 also includes an improved anti-reflective screen that offers higher contrast and clearer visibility in well-lit places and can even be used outdoors.

The PSP gaming library is hundreds of titles strong and covers a wide variety of genres. Whether you are seeking the hard hits of football, the strategy of a puzzle game, or anything in-between there’s sure to be many games for you. The PSP is capable of graphics quality that is comparable to the PlayStation 2, but in a pocket-sized package that you can take wherever you go.

With the PSP, you can show a slideshow of your photo collection with your friends by simply placing them on a Memory Stick Duo and accessing them via PSP’s XMB. Additionally, you can beam photos wirelessly to friends who also have a PSP via the device’s ad hoc wireless connection.

What’s in the Box

The PSP-3000s built-in microphone provides additional voice functionality in certain games, as well allows for Skype functionality without the use of an additional microphone
Includes a copy of Madden NFL 11 for PSP along with the PSP-3000 for the same price as the hardware alone making for an outstanding value
Within Madden 11 enjoy game modes such as the classic Franchise mode, Superstar Challenge mode and Mini-Camp Competition mode, along with a mini-game and the ability to create your own custom plays
With the PSP-3000 enjoy the high end multimedia support for games, movies, music, video, the Internet and more, that is all possible through one device
The PSP-3000 features a brilliant 4.3-inch widescreen color display, with improved daytime visibility in direct sun